HIV Testing Week 2018 started on Saturday 17th November, and Spectrum is teaming up with other healthcare services to offer local testing sessions and increase awareness around risky behaviours associated with HIV. 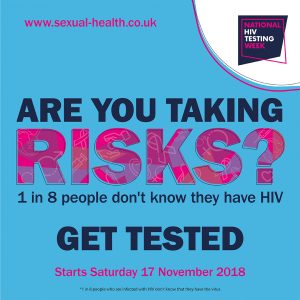 In 2017, 43% of people received a late diagnosis of HIV and an estimated 1 in 8 people with HIV are unaware that they have the virus. Late diagnosis can delay access to effective HIV treatment and lead to poorer long-term outcomes – which means that testing early is more important than ever. Factors which can increase your risk of exposure to HIV include unprotected sex, casual liaisons (without condoms/PrEP/PEP) and needle-sharing.

HIV testing will be available in 15 locations across Wakefield, Barnsley and Wigan and Leigh. A full list of testing dates can be found on the testing date calendars, and drop-in services will also be available.

Mark Rowe, Head of Service at Spectrum’s Sexual Health Services in Wakefield said: “We encourage anyone who has been exposed to risks associated with HIV to take a HIV test. Testing is quick, simple and free and can give you peace of mind if you’re worried or unsure. Early diagnosis can save lives and is crucial in supporting people with HIV to access effective treatment and live well for longer.” 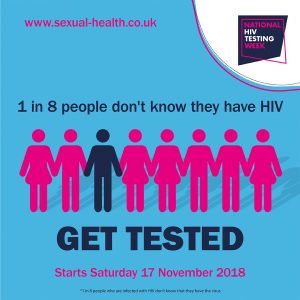 Although HIV cannot be cured, people on effective HIV treatment can live a long and healthy life without passing the virus onto others. ‘Effective treatment’ describes when a person has been taking their medication as prescribed for at least 6 months. At this stage the HIV virus in their blood has been reduced to what is called ‘undetectable levels’. The Living with HIV page includes real-life stories, advice and signposts to support groups.

HIV Testing Week will run from Saturday 17th November – Saturday 24th November and you can follow our HIV Testing Week Campaign activity on Facebook, Twitter and Instagram by following @spectrumsharp. Further advice can be found on the Spectrum HIV campaign page.

There are many myths surrounding HIV and an online HIV quiz has been created for the public to test their knowledge.

If you would like to get in touch with us regarding this campaign please email pr@spectrum-cic.nhs.uk