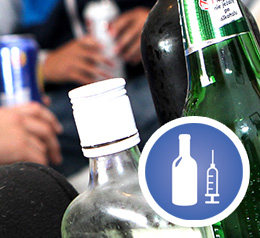 Units and the risks of alcohol misuse

Alcohol is a powerful chemical that can have a wide range of effects on almost every part of your body, including your brain, bones and heart.

Alcohol and its associated risks can have both short-term and long-term effects. In 2009-10, there were around 1 million hospital admissions due to an alcohol-related injury or condition.

1-2 units
After drinking 1-2 units of alcohol, your heart rate speeds up and your blood vessels expand, giving you the warm, sociable and talkative feeling that is associated with moderate drinking.

4-6 units
After drinking 4-6 units of alcohol, your brain and nervous system starts to be affected. It will start to affect the part of your brain that is associated with decision-making and judgement, making you more reckless and uninhibited.

The alcohol will also impair the cells in your nervous system, making you feel light-headed while also adversely affecting your reaction time and co-ordination.

8-9 units
After drinking 8-9 units of alcohol, your reaction times are much slower, your speech will begin to slur and your vision will begin to lose focus. Your liver, which filters alcohol out of your body, will be unable to remove all of the alcohol overnight, so it is likely you will wake with a hangover.

10-12 units
After drinking 10-12 units of alcohol, your co-ordination is highly impaired, placing you at serious risk of having an accident. The high level of alcohol has a depressant effect on both your mind and body which makes you drowsy.

This amount of alcohol will begin to reach toxic (poisonous) levels. Your body will attempt to quickly pass out the alcohol with your urine. This will leave you feeling badly dehydrated in the morning, which may cause a severe headache.

The excess amount of alcohol in your system can also upset your digestive system, leading to symptoms of nausea, vomiting, diarrhoea and indigestion.

More than 12 units
Drinking more than 12 units of alcohol places you at a high risk of developing alcohol poisoning, particularly if you are drinking lots of units in a short space of time. It usually takes the liver about one hour to remove one unit of alcohol from the body.

Alcohol poisoning occurs when excessive amounts of alcohol begin to interfere with automatic functions of your body, such as your breathing, your heart rate and your gag reflex (which prevents you from choking). Alcohol poisoning can result in a person falling into a coma and can lead to their death.

The short-term risks of alcohol misuse include:

If you drink hazardous amounts of alcohol for many years, it will take its toll on many of your body’s organs and may cause organ damage.

The organs that are known to be damaged by long-term alcohol misuse include the brain and nervous system, heart, liver and pancreas. Heavy drinking can also increase your blood pressure and your blood cholesterol levels, both major risk factors for heart attacks and strokes.

Long-term alcohol misuse can weaken your immune system, making you more vulnerable to serious infection. It can also weaken your bones, placing you at greater risk of fracturing or breaking them.

As well as having a significant impact on your health, alcohol misuse can also have long-term social implications. For example, it can lead to: