Broken down, PrEP stands for:

PrEP is highly effective in preventing the sexual transmission of HIV, as long as the medication is taken correctly, as directed. However, PrEP does not prevent other sexually transmitted infections or pregnancy. 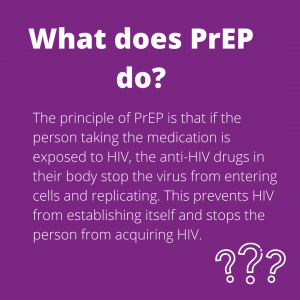 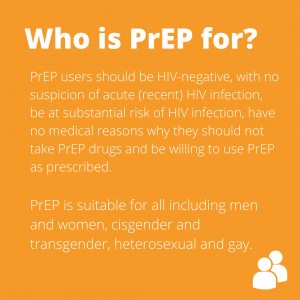 How to take PrEP?

How you take your PrEP depends on:

Switching between dosing options to match your sexual activity and patterns is totally OK. You can adjust your PrEP regime to best suit you as your situation changes.

PrEP and other medications

PrEP does not interact with most other medicines.

If you are prescribed other medication, always tell your doctor (including your GP) that you are taking PrEP. You can also ask a pharmacist to check for drug interactions. This includes with over-the-counter medication.

It does not interact with alcohol or recreational drugs. It can be taken by people using hormonal contraceptives and most over-the-counter medicines. PrEP is safe for trans people taking hormones.

Tenofovir disoproxil fumarate (one of the two medicines in PrEP)  may cause kidney problems, so should be used with caution in  people on other medicines that also cause this.

These include some non-steroidal anti-inflammatory drugs (NSAIDs), especially diclofenac.

Taking both drugs together can cause kidney problems. Other NSAIDs include ibuprofen and naproxen. Avoid using these medications if you are taking PrEP, or let your doctor know if you need to take them.

PrEP and side effects

Most people who take PrEP have no side effects and those that do tend to be most common during the first month of using PrEP.

Possible side effects include mild nausea, diarrhoea, bloating and headache.

PrEP can also reduce bone density by 1-5%, causing slight thinning of the bones.

Where to get PrEP?

PrEP is available from the NHS for people at high risk of HIV.

Find out all you need to know about PrEP to help you decide if it’s right for you here.

Watch the stories of those taking PrEP.