Aimee wishes she and Luke had tested sooner for STIs – before waiting six months into their relationship.

When Aimee first met Luke she’d only had a couple of sexual partners and so sexually transmitted Infections weren’t something she was ever worried about. Aimee wrongly thought that because she was having less sex than her friends and never engaged in one night stands, it was highly unlikely that she could pick up chlamydia and other infections. But it only takes one person, one time and no condom to pass on STIs and if both Aimee and Luke had visited a sexual health clinic at the start of their relationship, neither would have had to experience unusual symptoms or potentially risk developing more long-term conditions such as infertility.

Aimee said; “I never expected to have an STI. Initially I didn’t feel any different or have any of the common symptoms and because I wasn’t having ‘loads’ of sex, protecting against STIs didn’t cross my mind. When I met Luke, he’d just come out of another relationship I never thought he would have something like chlamydia.”

Because both Aimee and Luke hadn’t had many sexual partners, they assumed that each other wouldn’t be carrying an STI and never discussed testing before entering into their relationship. Eventually Aimee started with symptoms associated with chlamydia – such as unusual discharge – which prompted her to get tested for STIs. She received a test in a sexual health clinic without telling Luke because she was worried how he would react to the news – six months into their relationship.

“When I received the positive result for Chlamydia I didn’t know what to think. I knew I hadn’t slept with anyone else since Luke and now I doubted his loyalty to me. It was harder to bring into a conversation than it would have been when we first met.”

Telling a sexual partner that you have an STI is the responsible thing to do even if you feel awkward, nervous and anxious about their response.  Aimee approached the conversation with honestly and explained to Luke that they should have tested together at the start of their relationship to protect each other.  Aimee and Luke both tested positive for Chlamydia and neither of them claimed to have slept with anyone other than each other – meaning they’d been carrying the infection for over six months.

“You never expect your new partner to have an STI. But if they’ve had unprotected sex before even with one person, it’s a possibility. We don’t know who had the infection initially – Luke and I both had previous sexual partners – and so I wish we’d taken the test sooner. Hopefully this won’t affect our fertility further down the line.”

There are some risks with undiagnosed STIs  – such as chlamydia and gonorrhoea – spreading to the reproductive organs and causing long term conditions such as pelvic inflammatory disease (PID), epididymo-orchitis (inflammation of the testicles) and infertility. More information can be found of the NHS website here: https://www.nhs.uk/conditions/infertility/

Luke and Aimee agreed that testing at the start of their relationship would have been better for their sexual health AND their relationship. Testing is free, quick and easy and can be done at your local sexual health clinic. Visit the find a clinic page to find your nearest Spectrum clinic in Wakefield, Barnsley or Wigan and Leigh. 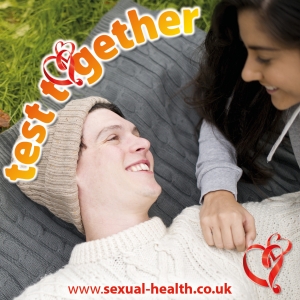 If you have been affected by this story and would like support please contact your local clinic.