Sophie was on holiday when she met Leo. They became friends and soon formed a group with other people they met at the hotel.

One night Sophie and Leo stayed up talking longer than everyone else and after getting to know Leo over a couple of days, there was an attraction between them neither could ignore. Feelings were mutual and they both wanted to have sex. So they did – and it was safe and enjoyable.

The next day everyone was back together and headed to the beach. Sophie and Leo were getting on so well until Leo started acting up by making inappropriate comments in a group discussion that Sophie didn’t agree with. This continued and she started to see a different side of him she didn’t like so much. Later that evening Sophie and Leo got into an argument and stayed away from each other for most of the night.

Sophie decided she didn’t want to throw away their friendship and so texted Leo and asked if he wanted to come and sit with her to sort things out. Leo came to her room and they began discussing their reasons for arguing in a much calmer way. At this point Sophie didn’t feel unsafe, much rather relieved that things were being resolved. After a while of easy talking Leo started trying to kiss and touch Sophie but Sophie said no. Even after concluding their argument, it had changed how Sophie felt about Leo romantically – she didn’t feel the same about him anymore – and so Sophie said no again, and again, and again.

Leo continued to kiss her – she said no – put his hands in her underwear – she said no – and push her down where they were sitting so Sophie couldn’t move. Sophie repeatedly said no and tried to push Leo off of before ultimately realising her words would not be heard and going limp. In that moment she had decided to shut her eyes as the struggle and saying “no” was not making Leo stop. Sophie felt embarrassed because Leo was her friend and if she screamed then everything that was happening would become real. Everyone would know what Leo was trying to do. Sophie felt ashamed, awkward and upset but also torn between her previous experience – because she had wanted to have sex with Leo before, did she have any right to scream out and say no?

Eventually it was all over but still with her eyes closed to hold back the tears, Sophie felt unable to move as she lay next to Leo in shock. Sophie woke up before Leo the next morning and immediately got out of bed and into the shower – ensuring the door was locked.

Sophie had really liked Leo and initially had wanted to spend all of her time with him but last night felt so wrong. Playing the situation over and over in her head Sophie became more and more scared of what had just happened to her and no longer felt safe being alone in his company.

Leo had taken Sophie’s right to consent away which left her extremely vulnerable. He had wrongly presumed that because Sophie had wanted to have sex before that she would want to again. She didn’t and tried her best to make that clear.

After speaking to a friend, Sophie found the courage to confront Leo about what had happened and when she did, he remembered the events in a completely different way. Leo was shocked at how Sophie felt and said he hadn’t thought Sophie was serious when she said no. He really liked Sophie and after the first time they had sex he was sure she always felt the same way. Their argument hadn’t changed his feelings for Sophie and he couldn’t understand how she could change her feelings so fast. Leo wanted to be close to Sophie again after the fall out and had missed not spending time with her.

Sophie said no but her voice and actions where overpowered by Leo. Was Leo ignorant, arrogant, or did he know Sophie felt scared? Sophie will never know but it has left her with a night she won’t forget – for all of the wrong reasons – and ruined any chance of friendship with Leo. After her experience, Sophie left the hotel to come to terms with what had happened but like so many other girls, decided not to go to the police.

You have a right to consent. It is important in a relationship, between friends, married couples or with someone new. If you do not give your consent to sex then it is rape. 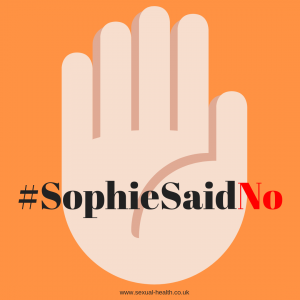 If you have been affected by this story and would like support for sexual assault or rape then please visit the Consent Campaign Help Centre.