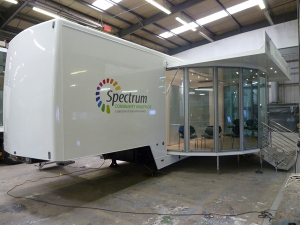 Spectrum can offer a range of mobile health and wellbeing services tailored to meet the needs of employers, organisations and partners.

Employers are increasingly introducing programmes that look after the welfare of their staff. Occupational health is a priority for many businesses and organisations. Spectrum can enhance and supplement existing programmes and bring expert health and clinical professionals to you.

We can arrange employee health days and health fairs and organise health roadshows at multiple locations across the UK. Themes that we cover include flu vaccinations, healthy hearts, stress management, diabetes health screens and much much more.

Our Mobile Clinic allows us to travel around the local community delivering tailored advice to a range of locations including leisure outlets and business locations.

We have also in the past participated in range of local events and organised our own Health Roadshows within the community.

Our services can include:

Our mobile health unit is designed to bring health and wellbeing services closer to you and at your convenience. It is kept to clinical hygiene standards and includes a ramp for people with disabilities.

The main floor space is large enough to be used for a variety of purposes, such as:

If you would like to book our mobile clinic for your organisation, or would like to invite us along to a local event, please contact pr@spectrum-cic.nhs.uk

Spectrum’s mobile health and wellbeing unit was stationed at Pinderfields General Hospital over Christmas 2014, supporting Emergency Department staff during some of the busiest weekends of the year.  This was an extension of Spectrum’s Alcohol Liaison Service, which is already in place at Pinderfields.

The mobile unit was located immediately outside the Emergency Department entrance, and was staffed overnight, at key times during the festive period, by teams of nurses and healthcare support workers.  These teams assisted the Emergency Department (ED) staff by handling less high priority cases such as dressing minor wounds and helping individuals who were intoxicated. This allowed the ED staff more space to focus on the more urgent and serious cases.

One patient was admitted in the early hours of the morning, heavily intoxicated and having been ‘thrown out’ of his current place of residence by a flatmate. He therefore had no fixed abode, and on leaving the Emergency Department was planning to sleep on the streets.

The patient was taken into Spectrum’s mobile unit, given food and a hot drink while the staff gave him some advice and informative materials on alcohol misuse. This also allowed the patient time for the effects of alcohol to wear off.

The mobile unit staff then made several attempts to contact his friends, as well as an overnight shelter in Wakefield, and find him somewhere to stay.  When        no-one could be contacted, the man was allowed to take his sleeping bag into a treatment room on the mobile unit. He slept there until around 4am when he packed away his own sleeping bag and left, thanking the staff for looking after him.

Staff at Pinderfields were very grateful for the extra support we provided, as were West Yorkshire Police.  Both ED staff and police officers showed an interest in the mobile unit, and said that it would be an excellent idea to reinstate the service during other busy periods throughout the year.

"I go home with the knowledge I’ve had a positive effect on my patients, knowing I have done my job, & the satisfaction that we’re making a difference to peoples’ lives." 🧑‍⚕️

Read here about a day in Peter's life 👉http://ow.ly/zgSu50KgFG0

We’re looking for passionate individuals to join our diverse team at HMP #Hull.

Whether you are starting your #healthcare journey or are an experienced healthcare professional looking for a new challenge we’ve got a role for you!

"I love how challenging each day can be. Every day is varied, and one day is never the same as the next..."

Read about what it's like to be a Primary Care Clinical Manager in a secure environment👉http://ow.ly/u75050KgB90

Do you want to be the difference in prison #Healthcare?

Why not join our team at HMP #Humber - we're currently recruiting for a number of positions! 👨‍⚕️

Anyone can catch monkeypox.

You get a rash with blisters plus aches, a fever and swollen glands for up to three weeks.

Avoid close physical contact with others visit http://nhs.uk/monkeypox as soon as you can.