Karen Jordan, Clinical Team Manager for Spectrum, has been named as Nurse Leader of the Year at the Nursing Times Awards 2016. 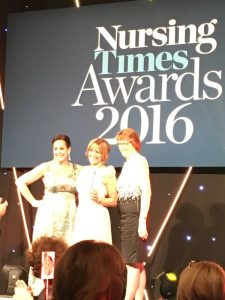 She has 37 years of nursing experience and has pioneered a new approach to engage with vulnerable patients across the county, including embedding an outreach nursing model which enabled staff to visit patients at home, in neutral locations and even out in the street.

We’re so proud of Karen, who is an inspirational leader at Spectrum and a great role model – not only has she been a great influence to those around her but was one of the founding members of Spectrum People, which eventually became our independent charity arm.

But don’t take our word for it – listen to what Karen’s patients have said about her in our videos centre.

A good way to cut down the amount you drink is to have several drink-free days each week and avoid binge drinking. take a look here http://bit.ly/3luUtQv

Are you struggling and need support?

Read about some of the amazing staff, who are working hard to keep patients, service users and colleagues safe here: http://bit.ly/SpectrumHeroes #HealthcareHeroes 💙

Are you looking for ways to help you cope during #COVID19? Take a look at the fabulous January #Coping Calendar from
@actionhappiness
for some simple advice and tips ⬇️⬇️⬇️

What’s a support bubble?
A support bubble is where a household with one adult joins with another household. 👨‍👩‍👦👪👨‍👩‍👦👪👨‍👩‍👦
Households within a bubble can still visit each other, stay overnight, and exercise together.
➡️ http://ow.ly/OM6Y50D8yES