You are here: Home / Health and Justice / HMP Holme House Hero Volunteers At The Ukrainian Border 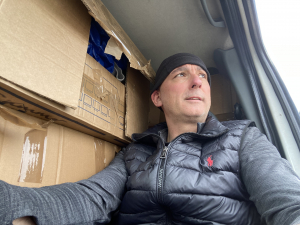 An Urgent Care Co-ordinator at Spectrum has been providing vital support for war victims at the Polish-Ukrainian border. John Robinson, from HMP Holme House, completed the self-funded trip after being inspired by a friend’s son, who set up a fundraising project to provide first-hand aid at Przemyśl Ukrainian Refugee Camp.

With the support of his line manager Jane Wray, John and a friend flew from Newcastle to Krakow and collected flat pack bunk beds to be delivered to a makeshift refuge, via transit van. After a 1,148km round trip, the beds were delivered to the disused school, housing over 100 refugees. Without power tools, John and his friend stayed to build 16 beds in total for the Ukrainians.

John explained, “The first five beds we built led to 10 people sleeping in one room. I found seeing these refugees particularly distressing. The young children did not affect me as much, as it felt like an adventure for them. However, as a father of teenage children, I could not look the teenagers in the face. I know my 16-year-old daughter would just not cope with the situation that these people have found themselves in.” 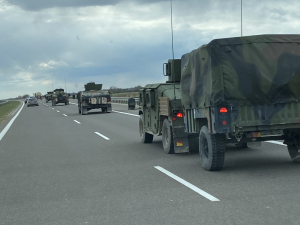 In addition to building beds, John and his friend also delivered food supplies from a cash & carry warehouse to various stations, for peers to collect and travel deep into Ukraine with.  Some journeys were under military escort; border crossing delays of between three and 12 hours impeded travel, which fortunately meant that John avoided a trip to missile-hit Lviv in western Ukraine. The men later teamed up with the Norwegian crisis response team Paracrew, helping to move more food supplies. 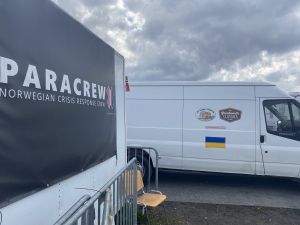 “This was a moment of great international teamwork – two Brits and a van, in Poland, working with the Norwegians to help Ukraine. There were about 60 charities at one of the main border crossings at Przemyśl. We observed huge queues of traffic trying to get into Ukraine, against people walking over the border carrying suitcases and literally carrier bags. This was somewhat sombre.”

The jobs that the duo completed were all coordinated via WhatsApp and social media platforms. John left Poland on April 21st, and returned to work on the 25th. 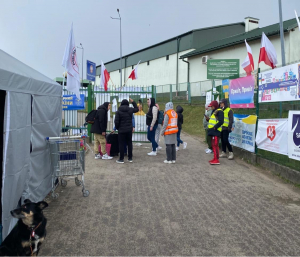 John said, “I feel very privileged that we were able to go and provide help. How could I not go when we see what’s happening, the mass graves, the torture. It’s now time for a period of reflection. It has been an emotional week – one we hope will never have to be repeated.”

Jane Wray, Head Of Healthcare at HMP Holme House, said “John agreed to deliver bunk beds to the people of the Ukraine so they could have a good night’s sleep. We are so proud of John and what he has done – he has a heart of gold.”

John’s compassion is shared by Spectrum Chief Executive Dr Linda Harris OBE, who is taking part in a 12-day coast-to-coast walking challenge this June to fundraise for the DEC Ukraine Appeal. For more info and to donate, please click here.

"I go home with the knowledge I’ve had a positive effect on my patients, knowing I have done my job, & the satisfaction that we’re making a difference to peoples’ lives." 🧑‍⚕️

Read here about a day in Peter's life 👉http://ow.ly/zgSu50KgFG0

We’re looking for passionate individuals to join our diverse team at HMP #Hull.

Whether you are starting your #healthcare journey or are an experienced healthcare professional looking for a new challenge we’ve got a role for you!

"I love how challenging each day can be. Every day is varied, and one day is never the same as the next..."

Read about what it's like to be a Primary Care Clinical Manager in a secure environment👉http://ow.ly/u75050KgB90

Do you want to be the difference in prison #Healthcare?

Why not join our team at HMP #Humber - we're currently recruiting for a number of positions! 👨‍⚕️

Anyone can catch monkeypox.

You get a rash with blisters plus aches, a fever and swollen glands for up to three weeks.

Avoid close physical contact with others visit http://nhs.uk/monkeypox as soon as you can.