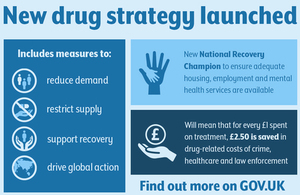 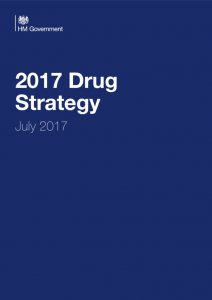 , to reduce illicit drug use and increase the rate of individuals recovering from drug dependence.

Each year in the UK, drugs cost society £10.7 billion in policing, healthcare and crime, with drug-fuelled theft alone costing £6 billion a year. Research shows that for every £1 spent on treatment, an estimated £2.50 is saved.

The new strategy confronts these threats and sets out new action to protect the most vulnerable, including the homeless, victims of domestic abuse and those with mental health issues.

In addition, the Department of Health has issued the latest ‘Orange Book‘, giving guidance on how clinicians should treat people with drug misuse and drug dependence problems.

This 2017 version offers new guidelines on:

The new guidelines also have a stronger emphasis on recovery and a holistic approach to the interventions that can support recovery.