Founded at the start of the 20th Century, Fulwood and Broughton Cricket Club is located in Preston, Lancashire. Since 1983, the club has won every senior and junior divisional title and knockout trophy available (with a few minor exceptions). The backbone of this success has been the consistent production of top quality homegrown players. Fulwood and Broughton CC consists of three Senior Saturday Teams, a T20 Team, a Sunday Team, a Midweek Team, and a number of Junior Teams.

I have been the Social Media volunteer at Fulwood and Broughton CC for the past two years. After playing cricket at the club for 30 years, as well as socialising there, I wanted to stay involved and connected as it is a special place within the local community. 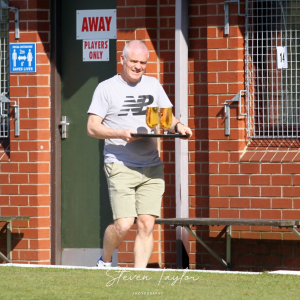 On a normal day, my role involves looking after the club’s social media platforms (Twitter, Facebook and Instagram) as well as writing match previews, reports, score updates and posting photos. I also encourage fundraising and promote the ladies team, junior teams and upcoming events. I even helped out by volunteering to ‘wait on’ at weekends when the bar opened a few weeks ago, as we couldn’t afford to employ staff initially. Here is a photo of me serving beers!

What I love most about my role is speaking to new spectators when they come to watch and hearing them say that they read about it on social media. I also enjoy receiving messages from people around the world, appreciating the score updates and photos.