Friends of Sandal Castle (FoSC) is a committee of volunteers who work with Wakefield Council to raise the profile of Sandal Castle, showing its relevance in a modern world as well as a link to the past.  Set up in 2010, its primary aim is to promote the castle as an important historical site and local resource.

I am the Secretary for FoSC, just south of Wakefield. Due to Covid, we were unable to put on any events last year even though it is outdoors. In previous years, however, I have organised the Battle of Wakefield Memorial Walk, Castle Rock and medieval events there. 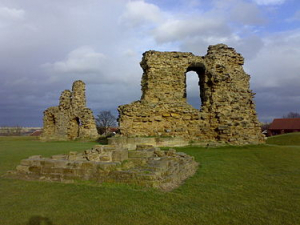 I started volunteering for FoSC in 2017 by accident.  As we were re-enactors of the Wars of the Roses period, my husband and I thought we should be doing something at our local castle at Sandal as it was pivotal in that era. After meeting with the committee to discuss the idea, they asked me to help organise and advertise it.  It was a huge success and the Chair of the FoSC asked if I would join the committee.  Shortly after, the secretary went on maternity leave so I was asked to cover the role temporarily – and I have been doing it ever since!

There’s no such thing as a “normal day”, as it depends on what sort of event needs planning. The Committee usually meet once a month to discuss what events we want to do and decide on dates.  I am responsible for completing the paperwork, risk assessments and applications involved to put on an event and ensure we have enough volunteers there on the day.  If it is a medieval event, I liaise with the medieval groups who are doing the show and ensure they have what they need, allocating the areas where they can pitch tents and arrange the running order.  I also take the minutes of committee meetings and AGMs.

What I love most about this role is that there hadn’t been an event at Sandal Castle for years, as parts were unsafe and in desperate need of repair.  When the Battle of Wakefield Memorial Walk happened on 30th December 2017, over a hundred members of the public turned up to march with the re-enactors from Wakefield Cathedral to Sandal Castle. The Bishop of Wakefield also got involved (heading the procession) and the Wakefield Express and Yorkshire Post covered the event. That smashed my expectations on a cold day in the middle of winter and showed me that people were still interested in their local history.  The repairs that the castle needed have now been done and we have been able to put on more events including Castle Rock – a first, as Sandal Castle had never been used as a concert venue before!  Every time I am involved in organising a well-attended event, it makes me happy that the castle is useful again and people are enjoying it once more.

Several years ago, I attended a medieval event at Lincoln Castle and really enjoyed it. Then in 2015, my husband met a re-enactor who said we could join his group.  I became an archer and my husband was a man-at-arms (soldier).  As I have a young family, I love that it gives my children an opportunity to be close to nature and interact in society where there is no modern technology to distract them. I also enjoy the opportunity to educate people in a fun and hands-on way; we allow people to try on helmets and pick up the swords (they are all blunt) under supervision and show them how they were used, as well as staging recreations of real battles. Below is a photo with my boys, and me as an archer. 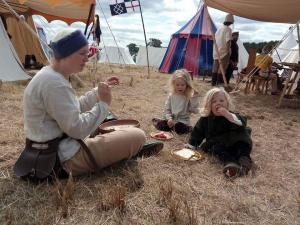 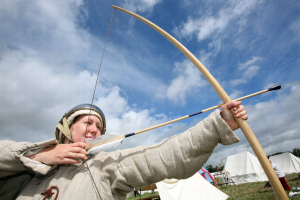