Making changes to your drinking habits can have a long-term impact on your health, making you more energetic and slashing your risk of health harms in the future.

We understand that if you have struggled with alcohol misuse for a long time, the road to recovery can be difficult. Read below to hear the stories of people who have thrived in recovery.

Binda: “I almost lost everything; now I never look back” Binda was born in Bradford and began drinking at the age of 13.
After moving to the Wakefield District, she struggled with alcohol misuse as a teenager and got caught up in a party lifestyle, often drinking to excess in local pubs and bars. By 18, her drinking had spiralled out of control and Binda had been in and out of treatment services for many years before coming to Inspiring Recovery in 2017.

She said, “I almost lost my partner, my house and my son due to my drinking. I was sacked from a job I’d held for 25 years.”

Realising the effect that her drinking was having on her family, Binda was ready to make changes. She worked closely with Inspiring Recovery to gain support after giving up alcohol, and regained confidence and skills through the Socialicious café project. She is now completely alcohol-free and looking forward to Peer Mentoring.

David: “I wish I had swallowed my pride years ago”

David was supported by our partners, Turning Point, to give up alcohol after struggling for over 25 years. Play the video clip (left) to hear about his experiences with alcohol addiction and progress towards recovery.

“I began drinking at 14. My marriage broke up (…) I became homeless because I walked away from my family, my children, everything. I lived rough, in hostels and everything else. I decided I needed to do something about it, but it took me 15 years. Some people think that (talking about drink) can be detrimental, but it gave me an outlet to talk about who I am and what I am without any embarrassment. You’re talking to people who actually understand. Your Key Worker helps guide you and think it through to making the right decision. It was an enormous step for me to admit that I needed help.”

“CGL helped me to understand that my Mum’s drinking wasn’t my fault, and to realise that I was not to blame and couldn’t control it.

“Being able to talk to someone really helped and the staff supported me to build a better relationship with my Mum. Today, we don’t argue over her drinking anymore.”

In England and Wales, an estimated 550,000 people are thought to be drinking to ‘dependent’ levels (PHE).

Only one-fifth of this number, around 100,000, are accessing treatment services. #AAW2018 #Change

Benefits of giving up alcohol 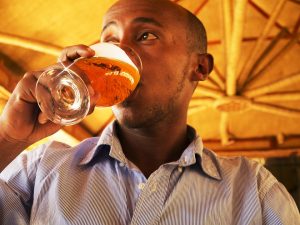